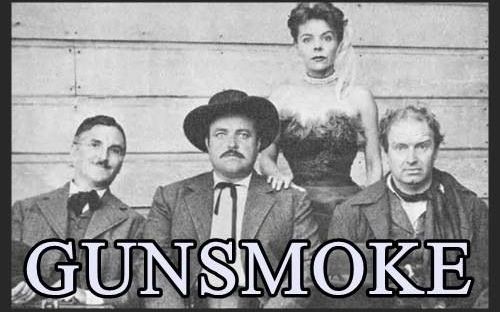 After close to a year of voice acting for other people, I’m also producing my very own audio project: recreating an episode of the classic Gunsmoke radio show!

Some of you may remember Gunsmoke as an extremely long-running television series from the mid 1950s all the way to the 1970s, but before James Arness, Dennis Weaver, Milburn Stone, and Amanda Blake brought the Gunsmoke characters to life on TV, they existed in the sound waves as portrayed by a cast of prestigious radio voice actors including William Conrad (who later played the protagonist of the Cannon television show in the 1970s).

This fan production pays tribute to their combined accomplishments in sound and on screen, and features a new cast of aspiring voice actors (AVAs) from the twenty-first century:

Tom Doughty as Sam the Barteder

and Jonathan Dolnier as Weed Pendle + Messers. Tyler and Short

The plan is to recycle old musical cues and sound effects from the original recordings of Gunsmoke where I can, but already, this project has taken on some modern deviations.  We’re casting actors from around the world, including the UK and Australia, and I will be voicing the narrator (originally a male actor with a booming baritone voice) who opens and closes every episode.

If all goes well, a recreated episode of Gunsmoke called “The Guitar,” written by John Meston and originally adapted for radio by Norman McDonald, will be released in October or thereabouts.

Allison Rose is a New England-based voice actor. She has lent her voice to several small projects, including the brickfilm fan series, 'Star Trek: Talmidon' on YouTube, and will soon be appearing in a WWII audiodrama entitled Codename: Cormorant. Her voice over skills include impressions, narration, and character acting. [Read more....]